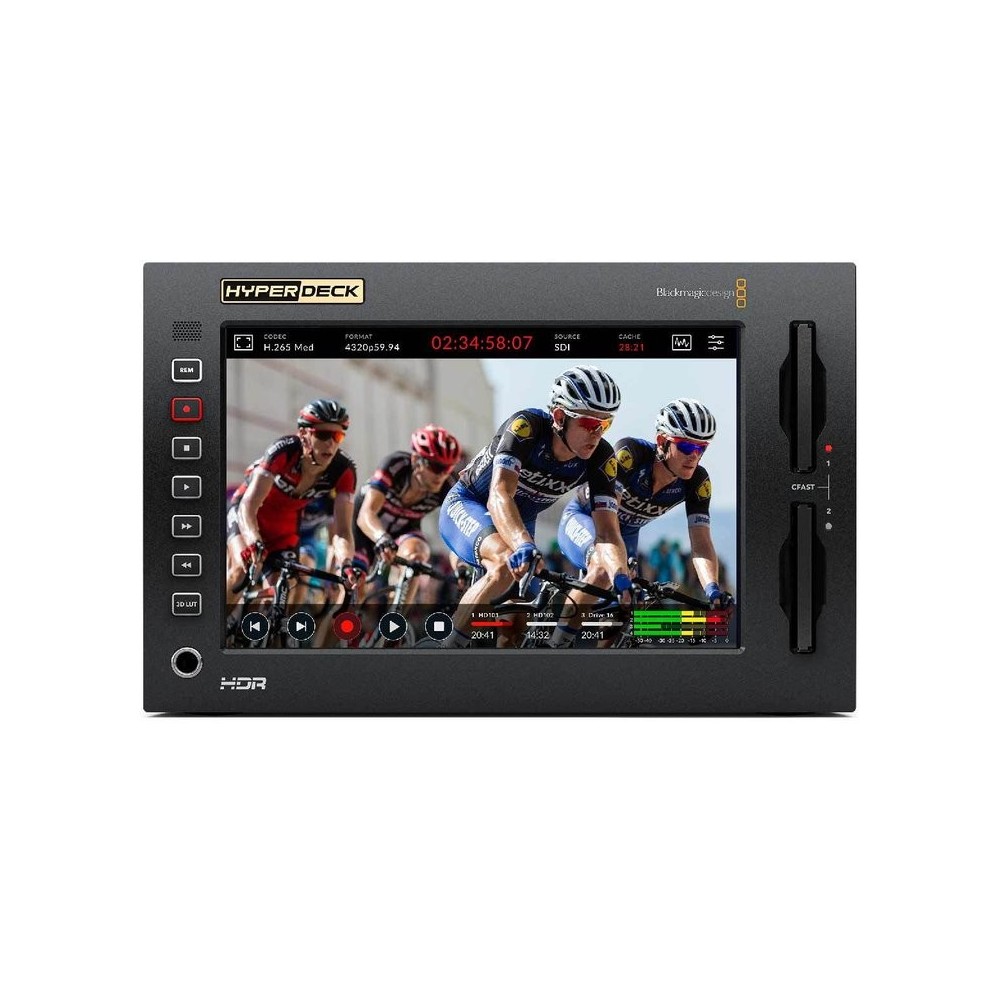 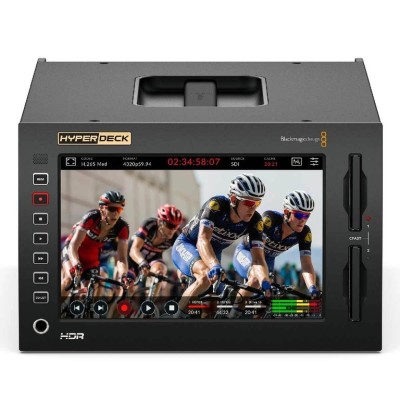 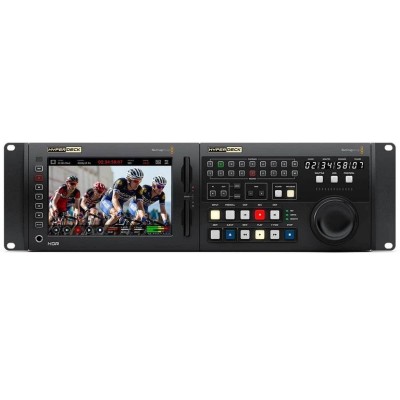 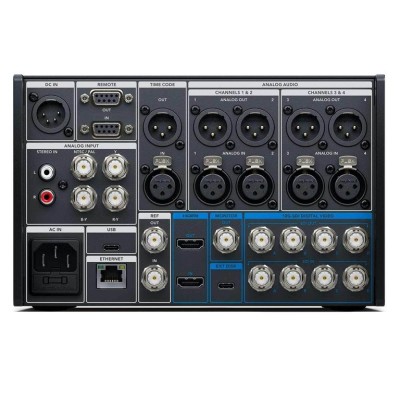 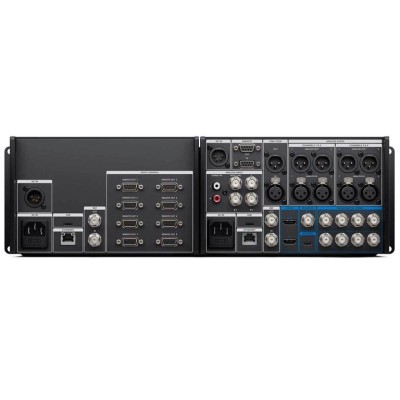 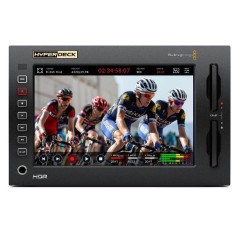 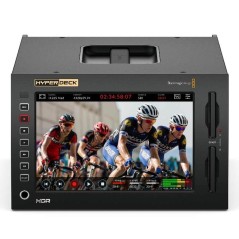 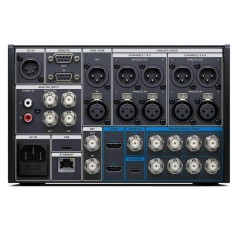 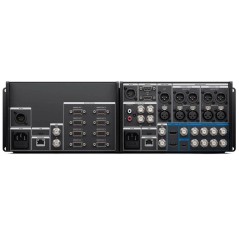 The Blackmagic HyperDeck Extreme 8K HDR is an 8K recorder with touchscreen. It features physical controls and two CFast card slots. It is ideally used together with HyperDeck Extreme Control, which offers traditional VTR control functions, with integrated editor to automate videotape-based ingest. They are the same size, 3 RU, and half rack width, and can be installed side-by-side and combined as a traditional video.

It features Quad 12G-SDI connectivity for 8K, analog connections and a USB Type-C port, which can be used to connect flash drives or disk systems such as the Blackmagic MultiDock 10G 4-slot SSD. It has an optional M.2 PCIe NVMe M.2 cache card, which avoids dropped frames if disks fill up or run too slow. The HyperDeck uses the space-saving H.265 codec and supports ProRes 422 HQ, 422, 422 LT and 4444.

Professional 8K HDR recorder with H.265 compression, three-dimensional LUT and optional cache memory. Compatibility with H.265 offers less storage space, achieving outstanding quality. It has a large touch screen to view the recorded material in more detail and control the equipment. Optionally, a HyperDeck Extreme Control unit can be installed to turn it into a professional recorder with traditional controls, including a search rotary knob and convenient to use control. With the HyperDeck Extreme Rack Kit (optional) you can install both in a rack or rack.

The recorder also includes two memory card slots, four 12G SDI links for 8K signals, USB-C port for external disks, a front speaker, a headphone connection, and several other analog connections. Analog inputs allow you to digitize older tapes so you can edit their content or stream it over the Internet over a variety of platforms. The optional cache prevents skipping frames if the storage unit is too slow or has no more capacity. The recorder also features 10G Ethernet connectivity to facilitate the use of high-speed FTP protocols, and its simple remote control protocol makes it easy to create 8K digital signage. Of course, the recorder also has the traditional SDI and HDMI video inputs. The unit also has integrated control indicators, which offer the possibility to perform a quality control to verify that the contents comply with the emission standards before transmitting them.

The four 12G-SDI links allow you to record and play back 8K images. These connections support different transmission speeds, so they are compatible with other 8K products, and can also be used individually to transmit SD, HD, or UHD signals. The recorder uses the H.265 compression system, offering the possibility of recording on commonly used CFast cards.

The LCD touch screen offers total control of the recorder. The device's interface includes buttons to record, start or stop playback, as well as a reduced timeline for easy scrolling. You can even slide your finger on the screen to move forward or backward. It also displays time code and volume meters, signal format, and storage unit status, among other graphical indicators, adjustment menus, and three-dimensional LUT loading and saving. 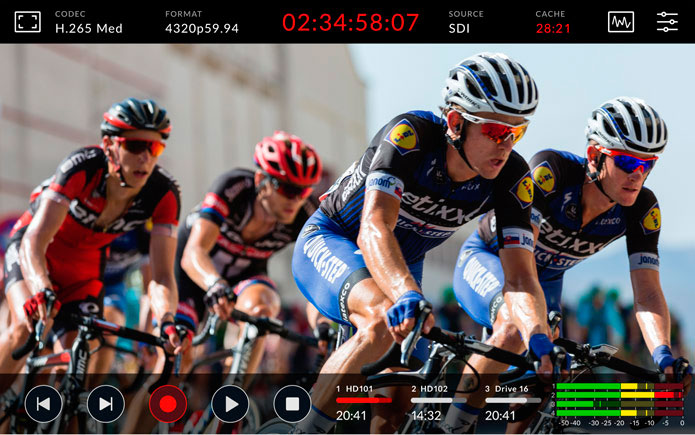 The unit has two CFast 2.0 card slots for storage or recording. These two CFast slots make it easy to replace cards, even during recording, to avoid interruptions. It is also possible to connect a Blackmagic MultiDock 10G device to use SSD drives. The H.265 compression system allows to record 498 minutes in 8Kp60 resolution, 1059 minutes in UHD 2160p60 or 2354 minutes in 1080p59.94 in a 1 TB card. This equates to more than 8 hours in 8K and more than 39 in HD. On the other hand, the recorder has a USB-C port that allows you to connect larger capacity external disks that have no space limitations. In addition, it is possible to use the same unit for recording and editing, so there is no need to waste time copying files before starting post-production. In this way, it is also possible to record to SSD disks in ProRes format in 8K because they have a higher transfer rate than CFast cards. The menus on the recorder screen also facilitate the management of external disks.